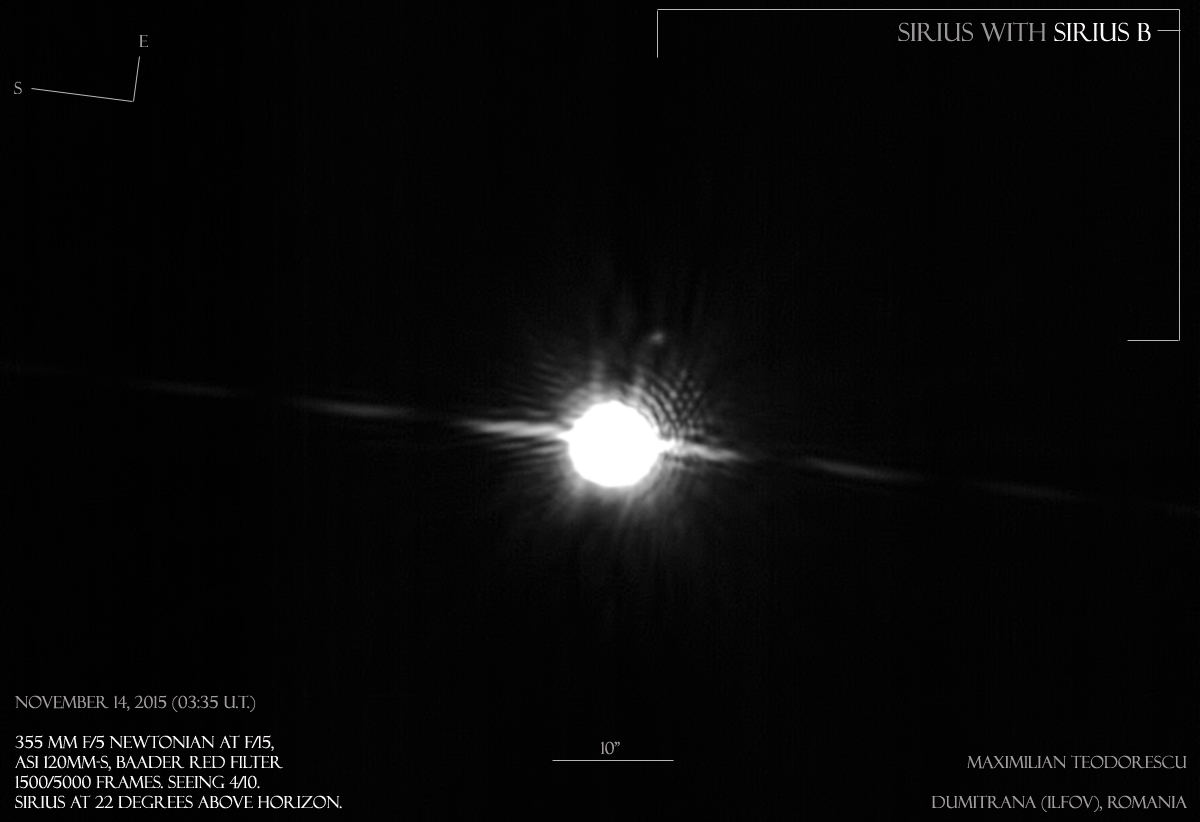 Another cold November morning, with -2 degrees Celsius, at my observing location, and a lot of fog. This time it wasn’t the Moon that I was aiming my scope at; it was the morning gathering of planets, with Jupiter, Mars and Venus shining over the South-Eastern horizon.

Before I could image the planets I had to wait for the telescope to cool down (the optics had to reach thermal equilibrium), and just before pointing it to Jupiter, I snapped a few thousand frames with an “old friend”: Sirius with it’s elusive companion Sirius B. Elusive used to be a few years ago, and still remains in smaller instruments, but using an 14 inch scope reveals pretty easy the smaller companion:

Next imaged subjects were the three planets:

Of course, more detailed information is necessary for the above composition.

The first planet imaged was Jupiter, with it’s still small size (just 33 arc seconds) compared to the opposition apparent diameter (50 arc seconds); but there will still be a few more months until opposition occurs, so for now this has to do.

Despite the seeing which did not allow for a good result, the Great Red Spot added a bit of color to the image, giving a nice view at the eyepiece.

The next planet was the most difficult to image, due to its very small apparent diameter, of only 4.4 arc seconds. This is the smallest diameter at which I’ve ever imaged Mars. Surprisingly, a lot of details are visible like the white polar cap and the dark-blue Syrtis Major formation.

The last imaged planet for the morning was Venus. Usually, to catch a glimpse at the planet’s clouds one needs to use an UV-pass filter, but since such an item is still missing from my filter set (they’re quite expensive), I’ve only used the Baader Blue filter. Still, some details are visible due to the high sensitivity of the ASI 120MM-S camera:

In the next few weeks and months Jupiter and Mars will improve their visibility as they move further from the Sun (apparently), move closer to Earth (also partially apparent) and climb higher in the skies.

Venus however is reversing course, getting closer to the Sun and shrinking its apparent diameter.