It’s been a while since my last post, and this was due to a lot of field trips in search of animals and insects. This was the main reason, along with some not so clear skies that didn’t allow me to make any type of Astrophotography. But finally, after weeks and weeks of waiting, I’ve succeeded in taking a few images of my long-time friend in the sky: the Moon.

In a very short trip in the village of Dumitrana (Ilfov) together with my brother-in-law, Mihai, and with my re-acquired small TS APO 65Q refractor (after I’ve sold it to another amateur astronomer at the beginning of this year and re-buy it from him), I had the chance to capture a series of images of the Moon at dusk accompanied by Saturn.

The series themselves were acquired in order to create a High Dynamic Range image of the pair, showing both the Sun-illuminated part and the Earthshine of our satellite, but also the star-filled background and Saturn with some of it’s satellites, including Titan.

The first such image, acquired at the nominal focal length of the instrument (420mm) with a Canon 550D camera working at ISO 200 is presented below:

The final image is composed of 11 series each a 20 frame stack with exposure times ranging from 1/250s to 6 seconds.

The image shows both the Moon and Saturn (upper left) with some of it’s satellites.

The second image was acquired with one more optical component placed between the camera and the scope: a TeleVue 2x Powermate, increasing the focal length to around 800mm. This image presents a view of the Moon similar to what we were looking at through the refractor at 100x. It’s also a multi-image composition, 9 series each 20 frames being merged to form a HDR shot. 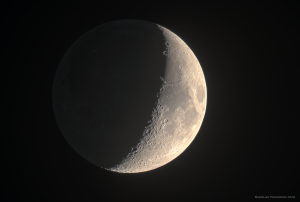 Hopefully I will get more and better views of celestial objects in the very near future, since I really miss the dark hours of lunar and planetary observing/imaging sessions and I’m looking forward to get my bigger scopes out in the field.