The reason why I’m writing another post in English is that the subject is related to the image processing technique described earlier in the post entitled “Tycho”.

This time, the “target” is another rayed crater: Messier. This is one of the best known craters on the Moon. At least for those who observe our natural satellite at the eyepiece or via imaging cameras. It’s peculiar shape is due to a very low angle impact (oblique impact). It actually consists of two named craters, Messier A and B. It’s easily recognizable features are the lateral (North and South) butterfly wings and it’s two-tailed ray towards the West, which means that the original asteroid approached from the lunar East. 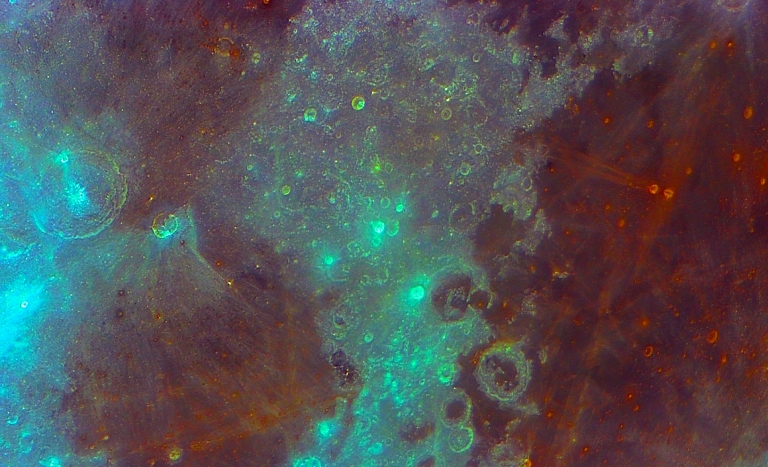 Of course, the equipment, date and all other technical data are the same as for the Tycho image from the previous post, except the fact that this is a small part of another mosaic, which I will present it in a future post. The processing is also the same, with the mention that I’ve applied a bit more saturation and the “auto-colors” in Photoshop.

When I’ve finished processing this last image, I’ve noticed something which I don’t think it was noticed until now: look at the reddish two-tail ray heading West from Messier. It seems that it also passes the highlands and even gets into Sinus Asperitatis, just North of Theophilus, the large crater to the left of the image. It also overlays another crater, Torricelli, and I think it goes even more but unfortunately I can’t show this in my images, since I can’t find any other data acquired that night corresponding to regions north of Theophilus. The actual length of the double-ray on the lunar surface is around 600km, as seen at least in the above image.

If you don’t see the double-ray, look at the following sequence made from images acquired by the Clementine lunar probe (“color-ratio” scheme, which can be found here), my image presented above and a third black-and-white image (another version of the above image) showing the orientation and size of the rays. 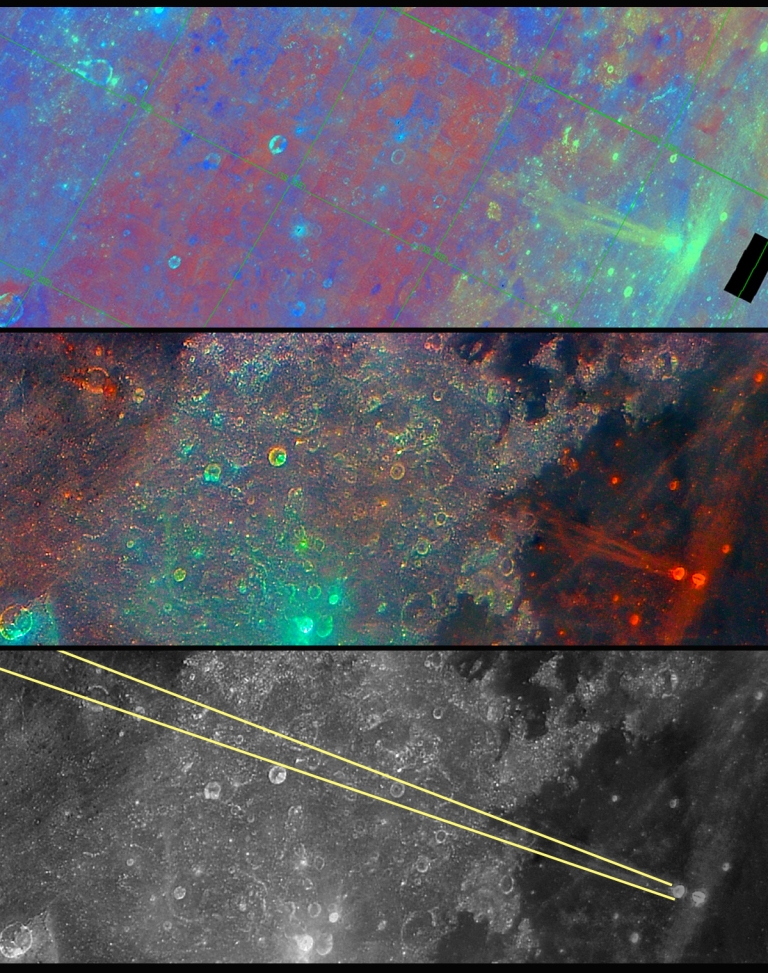 In the Clementine image, the double-ray is barely visible, but I can trace it for at least half of the length compared to the other images. So it’s not an artifact, and the over-processing I’ve applied to the image might look a bit “bloody”, but this is the only way I could be sure that there is a ray altogether.

Again, I don’t know of any other observation of this ray “extension” until now. Of course, it’s not fantastic news, since it’s quite normal for a ray to cross different landforms for hundreds of kilometers, but it does change my view of Messier. Maybe this “colored-infrared” imaging technique really is useful for detecting faint rays (at least) in lunar images.