This is a test shot. A test for a new high resolution macro imaging method that I hope to use more frequently as Spring unfolds…

For now, the subject in the image was motionless (read “dead”) so no big problems with focusing and moving from area to area. But I think that at some level it can be used in the wild on specimens that stay “dormant” for minutes at a time.

The technique itself requires many, many shots: each small area is imaged at a high magnification and, using focus-stack software, it is process to get sharp despite the small depth of field of the objective. Afterwards, all of the imaged areas are assembled in a large mosaic to get a full-body mage of the subject. This requires time and computing power, since the final image is rather large.

The following VERY LARGE image was actually resized to about 55% from original due to the immense size: 300Megapixels! For easy viewing, I had to shrink the file size to about 12 Mb, which compromised a lot of the details and quality of the shot.

Be patient and zoom in. Details in the order of microns to tens of microns are detectable.

The wingspan of this individual from the species Araschnia levana is around 33 millimeters. 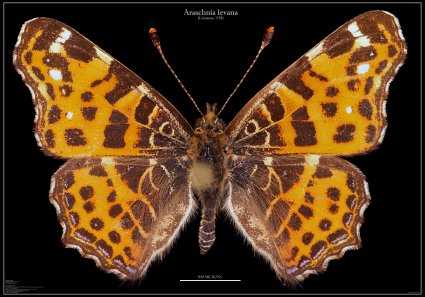