A new acquisition for me has just arrived: a specialized solar filter that allows humans to see the emission of hydrogen  at a wavelength of 656nanometers.

This H-alpha filter was a gift for my birthday from my wife, so the following shots are all dedicated to her. And of course a few imaging sessions whenever she requires them 🙂

As I’m still a child when it comes to new acquisitions, I had to try it as soon as possible, despite preparing to go on a short holiday at the Black Sea.

With so much luggage, I had to restrain myself at packing only the most lightweight equipment: a small photo-tripod, a small 65mm APO refractor, the very small ASI 174MM camera and of course the Quark filter and a small 32mm eyepiece. The setup looked like this:

That red component is part of the filter, which is powered from a 10Amp phone charger (nicely “blended” with the rest of the gear 🙂 ).

The first views at the eyepiece were fantastic, and much of that was due to the good seeing. Of course, the 65mm F/6.5 APO refractor was a bit too small for high magnifications, but the full-disc view was truly staggering.

And, since no equatorial mount was at hand, I had to shoot very short image-sequences to capture some detail in the prominences that were present on the solar limb. The first shot is a 400-frames stack out of 1000, and shows the chromosphere band and one rather large solar prominence occurring on August 16:

I did acquire many more image-sequences during my short holiday, but most of them were tests so no other final results are presented for now with the 65mm refractor. Despite this, I must say that the 65APO/QUARK combo is excellent for fast imaging sessions or when there is a limited space for astronomical equipment. It is also the best way for acquiring full-disc solar images, since the 4x barlow lens inside the Quark filter makes imaging the whole Sun quite hard for refractors with focal lengths of 800mm or more.

I say “800mm or more” because I was also able to try my other APO refractor (a 115mm, F/7) with the Quark filter. This happened after returning from the very short holiday,  and, unfortunately, on rather bad seeing conditions. Despite this, the large prominence (the same from the image above actually, but on a different date) made for a very nice view at the eyepiece, and of course on the laptop screen.

And a surface image, with two active regions and lots of hydrogen moving around: 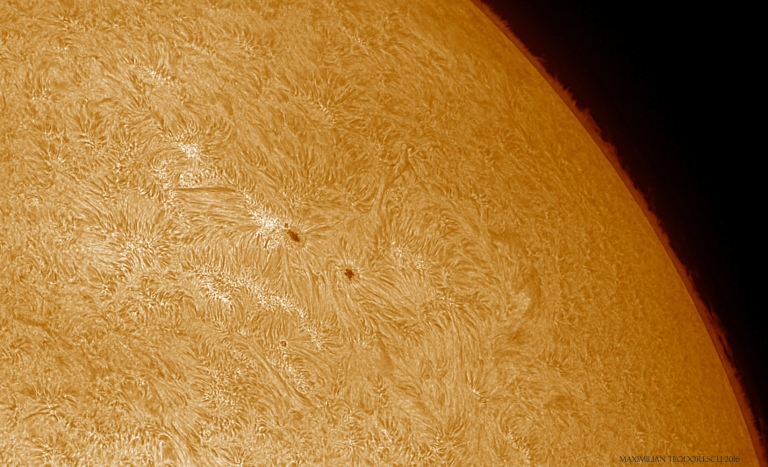 The main goal for my next H-alpha sessions are a full-disc shot acquired with the 65mm refractor, and a long-period animation showing the evolution of a nice prominence.

Of course, both require time and good seeing…

10 Replies to “First-light for the QUARK H-alpha filter”