Recently, a new comet was found in images acquired by the SOHO spacecraft. This rather small object survived it’s meeting with our star but eventually fragmented. A few days ago some amateurs succeeded in imaging the comet after sunset, and saw a cloud of dust still reflecting the sunlight. The name of this short-lived comet was C/2015 D1 (SOHO).

Observing this comet was the main reason myself and my friend Claudiu went to the Comana Woods (Giurgiu), under darker skies.

At first I wasn’t sure of the comet’s size and so I couldn’t find the object on the images. Only back home, while processing the frames, I’ve finally realized that the “ghost” of the comet was actually quite large. The size in my images is around 45-50 arc minutes, that is one and a half times the apparent disc of the Moon.

Despite the almost full-Moon and the bright twilight, I did succeeded in my task, and even captured a fresh view of comet Lovejoy, now close to Cassiopeia’s “W”.

All images were acquired using the 65mm APO Refractor (420mm focal length) and Canon 550D. The Moon shots required a 2x TeleVue Powermate. ISO settings were 1600 for the comets and 200 for the Moon. The exposure time for each of the 24 frames for the comet shots (each a 24-frame stack) were 1 to 1.4 minutes. The optical setup was placed onto the NEQ6 mount.

First, a composite grayscale image of the three objects, not to scale: 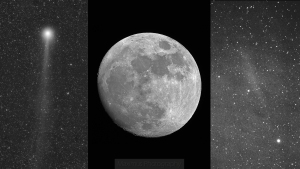 And the Moon, in slightly saturated colors; the image is a 200 frame stack:

And another composition, showing the normal grayscale view, the above presented slightly saturated view, and an over-saturated view: 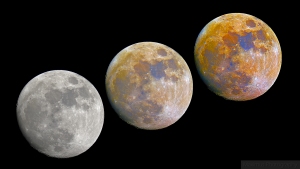 Quite a nice evening for astrophotography, despite imperfect conditions, but with a nice comet show and bright Moon.