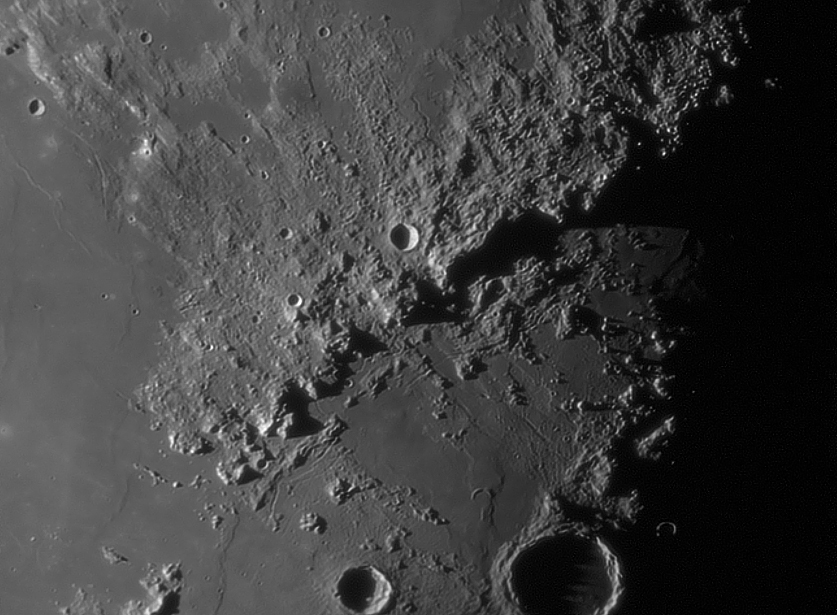 Since my 355mm Newtonian is again under construction, and my ASI120MM camera is “out of order” due to some unexplainable problems, I’m forced to use my smaller instruments with the DMK21 camera.

It’s not bad actually that I use these instruments, since once again they prove their quality, as does (again) my 4.5″ APO Refractor.

For two evenings I’ve used this scope for imaging the Moon and planet Jupiter under decent seeing conditions. Both visually and photographically, the details seen/obtained were quite impressive for a scope of this size.

I shall start with the lunar images, on both nights using the same setup, meaning the optics between the refractor’s objective and the imaging camera were a Baader Hyperion 2.25x Barlow lens at 3x for normal magnifications, and sometimes together with a TeleVue Powermate 2.5x for higher magnifications. 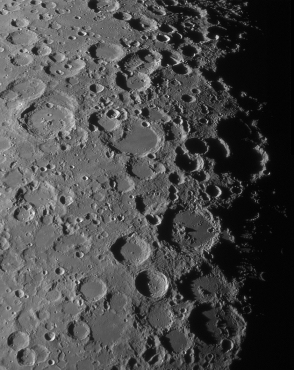 Notice the rima inside Vallis Alpes in the third image. There is also a rather special lunar feature (at least in terms of visibility with amateur telescopes) visible in the first image, named Ina. 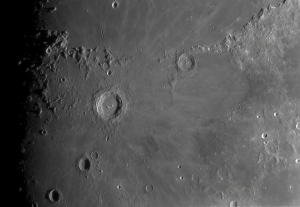 And an enhanced version of the above, with lots of domes visible near the terminator: 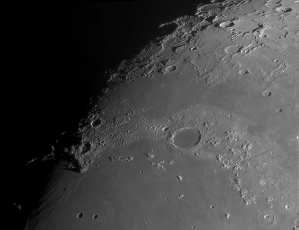 And now for the higher magnification images (at F/52, and under some poorer seeing conditions – S:4-6/10): 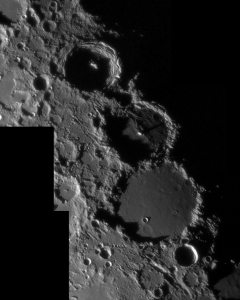 The above images at a higher F/D ratio were acquired as part of some tests, in which I’ve wanted to see just how much more details can the 4.5″ APO show at “insane” magnifications. It proves that a bit after F/30 the details remain basically the same, despite some better definition due to the larger image scale (details are larger per pixels at higher magnifications). This seems to be true under normal seeing conditions, but an exception might be possible under excellent seeing conditions.

And now for the planet Jupiter.

The following images were acquired on the evening/night of February 26, under good seeing conditions (6-7/10) most of the session. The F/D ratio was 52, so a bit too high, since Jupiter has a rather low surface brightness compared to the Moon. This is the reason I had to image at 15fps, and a 1/15s exposure time for each color channel. That meant a rather low frame number for each RGB sequence.

Nevertheless, these are my best results yet for this planet using the 4.5″ APO.

First, the end result, after a lot of processing. It actually shows a view similar with the ones I used to have with the 280mm C11 SCT and 300mm Newtonian scopes under poor seeing conditions (2-4/10). Callisto’s shadow and Io are also visible.

And now for part of the image’s rather good definition/contrast: the following shows the five images (all RGB) from which the above image was created using the de-rotation procedure in WinJupos.

And a small animation created from the same 5 sequences:

Somehow of a disappointment is the following image, acquired also on the 26th, but on a second session a few hours after the above images. This time I’ve used the 200mm F/5 Newtonian, but the seeing degraded a lot in those hours between the sessions, so the final image is quite poor. Still, the Great Red Spot (GRS) is visible. 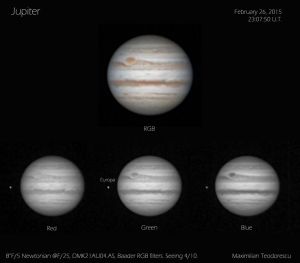 And since in the last two weeks I’ve imaged Jupiter with some of my instruments, I can now post a comparison between the apertures used and the seeing conditions:

It is easily visible that the aperture difference between the scopes is around 1.7x from left to right.

That being said, the quality of the details per aperture actually decreases, with the 200 and 355mm Newtonians showing views of the planet which could easily be acquired using scopes half their size but in very good seeing conditions.

Again, the 115mm APO performed rather good, since the above sequence shows non-derotated images (only RGB channels were assembled in WinJupos with de-rotation). If I would have compared the de-rotated image obtained with the APO to the 200mm scope RGB shot, the difference wouldn’t be that great at all, again showing the quality of the scope under good seeing conditions.

Final conclusion, which is of course very well known among amateur astronomers: use the right scope for your seeing conditions!