The first image, acquired together with Mihai, my brother-in-law, on the evening of September 18, shows the Moon with the craters Theophilus and Posidonius near the terminator. This image is a three panel mosaic acquired with the 115mm APO Refractor and ASI120MM-S camera placed at the focal plane, through a red filter. The seeing was poor, but some frames were usable from the 3000 acquired for each area, showing nice details.

And a wallpaper-like version, Full-HD:

The night before, I was together with Claudiu at another imaging session, trying to get a HDR image of the Moon with the small 65mm APO refractor and the same ASI120MM-S camera. Unfortunately, the seeing was very poor, and the Earthshine was very difficult to capture.

Nevertheless, I was able to get some images of another heavenly object, the globular cluster M22.

This is the result of 190 frames, each a 15 seconds exposure:

And since I usually do some investigations on all my images, either for resolution or interesting details, this image was not neglected either.

I’ve tried some extreme processing in an attempt to get an idea of the actual shape of the cluster. This was done using Photoshop filters such as Gaussian blur and Unsharp mask. The aim of the processing was to reveal the flatness of the cluster, from which the rotation axis can be deduced. More information about this can be found here and here.

The image below shows another processing of M22 and an inset of the extreme processing result, showing the approximate shape of the cluster (flattened in the shape of an ellipse) and the rotational axis, as drawn by hand, with no “mathematical” precision. This experiment was just for…fun. So no data can be considered as valid from the image. Despite this, the axis might not be very “off” from a “true” measurement. 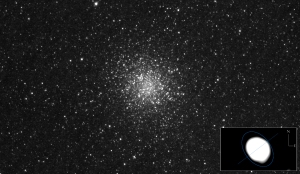 Fun as it might be, the result above shows that we can get a minimum of physical data about astronomical objects with modest equipment.