The third and final part of the excellent seeing conditions lunar imaging sessions of September 2015.

This last morning I was together with my brother in law at the observing location, and we were able to view, both on the laptop screen and at the eyepiece, some truly exceptional views of the lunar surface. This time I had enough “optical power” to get a magnification of around 600x, a value that allowed us to see something that very few amateurs have seen; craters, rilles, shadows, all looking like something seen from an spacecraft window orbiting the Moon.

I should get to the images now…

Another two-part mosaic of crater Arzachel and Rupes Recta and nearby Rima Birt. There is also a faint rille almost perpendicular to Rupes Recta (the Straight Wall): 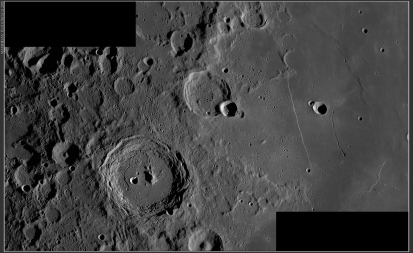 And the final mosaic, acquired just before a large cloud front rolled in, changing the weather for a few days.

It depicts the region of Rima Hadley, where Apollo 15 landed.

And a comparison view with the LRO images for the Hadley Rille. Small craters of 450 meters are discernible:

Nearby, (towards the lower left part of the mosaic shown previously) another interesting lunar formation, Ina volcano, shows some inner details: two darker “eyes”- patches of lava. Below, another comparison with the LRO view:

Hope to get again some excellent seeing conditions soon, as the Moon gets higher in the sky the next weeks.