The following image is a rather old one, but processing it required large amounts of time. Time which I couldn’t spare until now. Due to some alignment errors the chip of the camera used was not parallel to the focal plane, an error which made processing the frames very difficult.

Nevertheless, I’m now posting this image due to some interesting aspects I’ve observed.

First, the saturated version, with color data acquired using a Canon 550D at the focal plane of the refractor. 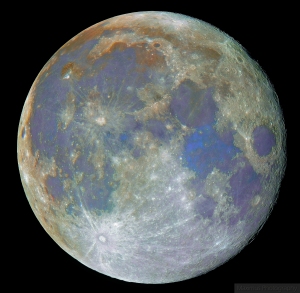 And the larger grayscale version, with lots of “under-focused” regions, due to the above mentioned error:

And now an interesting false-color processing showing the difference between the brightest and the darkest regions on the Earth-oriented face of the Moon. Black is for the brightest regions, dark blue for lesser bright areas, yellow-green for the maria, and red for the darker regions. Due to the illumination (<100%) the regions at the eastern terminator (right in the image) present some red areas, but this is due in part to the unevenly illuminated surface. This means that the most eastern regions that show red might not be at that level of darkness.

As an observation: look at the very dark floor of Plato which can be compared to the darkest regions on the Moon. This is one of the reasons why this crater is so easily recognized.

Also, the location of many red areas near the margins of different maria is interesting; except for a very few red spots near Tycho area, all of the other red zones are inside or at the margins of maria. This actually means that the spots near Tycho are the abnormal zones, since if the darker material is associated with the also dark material of the maria, then there shouldn’t be this type of material in the highlands. Still, it seems that it is…