Despite the fact that the following images have been acquired on the same date as the ones in the previous post, I will present them in a new one, since the acquisition and processing were done in a totally different manner.

The frames were acquired with an 8″ F/5 Newtonian telescope equipped with a Baader MPCC (coma corrector), and the trusty Canon 550D at ISO 800 and 1600. The setup was mounted onto an EQ6 equatorial mount, and guiding was done via a 50 mm F/4 finder scope with Meade DSI I camera and PHD software.

I will start with a wider image showing some of the inner part of the comet’s tail. The image is a two-panel mosaic, each a 3×5 minute exposures at ISO800. 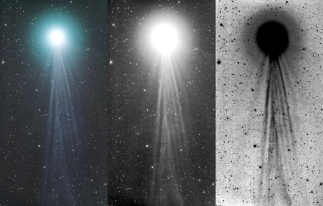 And a four-panel mosaic, each panel made from a single frame shot at ISO800 for 5 minutes.

The next images show an even smaller part of the tail, but this time the acquisition was a bit different: 13 frames, each a 1 minute exposure at ISO1600, were stacked using the nucleus as the alignment point. 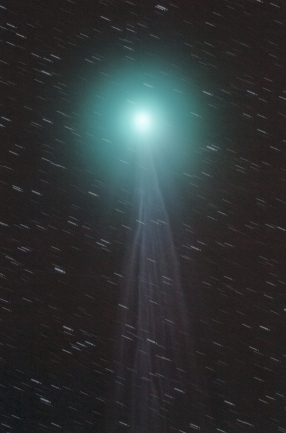 The image shows the delicate filament-like jets of dust and gas. The jellyfish aspect of the comet is even better seen in the following sequence, presenting one more processing mode (with less stars), and the corresponding negative version.

To see the main differences between the two processing techniques, a direct comparison (at the same scale) is shown below: 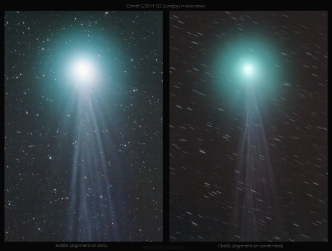 It can be easily observed that despite the brighter appearance of the image at left, and the pinpoint stars (and also some galaxies), the finer details in the comet’s tail are washed out due to the longer exposure time (5 minutes for each of the three frames) which meant that the comet moved a lot among the stars. This is not true for the second image, where the 1 minute exposures captured only a small movement of the comet, so the finer details remained better resolved.

And now, another image, a combination of the two from above, but still with a lot less details compared to the one on the right in the above comparison:

Some small galaxies cam be discern near the comet’s coma.

Still, a truly correct image showing the smallest details could be acquired with only very few short-time exposures, but this also requires a large diameter short-focal scope, and of course…perfect skies.

A small animation shows just how fast the comet was moving in just 14 minutes. Look for the tail changes as the gas and dust particles move away from the nucleus:

Too bad the skies did not cooperate this time…It would have resulted in a nicer and perhaps longer tail-panorama, and also a longer and better animation.