What a great Saturday! It should have been a “Sun-day”. At least for myself, my wife and her brother.

After starting the day with some quick looks through the eyepiece at the great sunspot groups facing the Earth, we’ve traveled for 40 kilometers towards the South, near the city of Daia, Giurgiu. There we’ve mounted our instruments on a hill, at 30 plus degrees Celsius. The reason for this excursion was that from this location the International Space Station would pass near some of the sunspot groups visible at the time, and I was eager to try something new: catch the ISS transiting the Sun at a higher focal length but with a much shorter field of view. This was possible after some calculations were made with pencil and paper as tools, to approximate where should we position ourselves, in relation to the maximum transit visibility band, to catch the ISS passing next to the sunspots. And, surprisingly, I’ve managed to estimate the position quite good. But of course, none of that would have been possible without the CalSky prediction. It’s very nice to catch such a short duration event like the ISS transiting the Sun or Moon when you have all the details from this site.

And now, the images…

I’ll start with the sunspot groups first, and a global image of the groups: 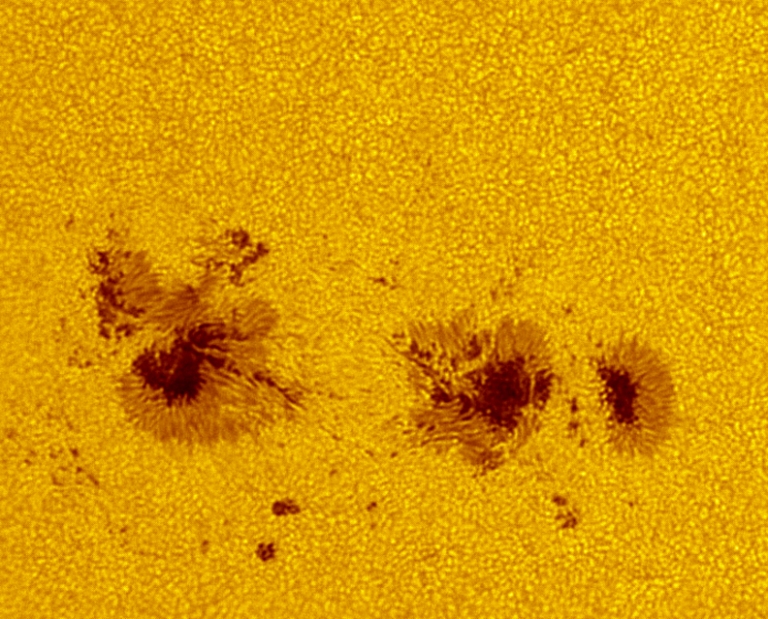 For this group I also have a two-image animation showing the evolution in a time period of four and a half hours:

The Sun is truly a dynamic object!

And now for the ISS transit…

The first image was acquired by my wife, using her filtered 90mm Maksutov and Canon 550D working at 1/3200s and ISO 100. She got the ISS in two frames, so two silhouettes of the ISS are visible in the image:

The second image is mine, using the 115mm F/7 APO Refractor at F/17 and ASI120MM camera with Baader Green CCD and Astrosolar full-aperture filters. I’ve got the ISS passing close to groups 2107 (lower-left) and 2104 in three frames, but unfortunately the seeing in those seconds was not good enough to get a decent solar surface shot. And also the shape of the ISS is a bit off, due to the image acquisition-transfer mode of the camera. I think I won’t be using the ASI120MM for this type of events, where a very fast-moving object crosses the field of view.

And I’ve also assembled a short animation from the RAW frames, showing the transit in almost real-time (acquisition was made at 21fps, animation is at 20fps), and at 2fps, so in slow motion to better understand what was the black object moving in front of the Sun. Observe also the seeing conditions changing when the ISS passes…

Well, after all, I think this “Sun-day” Saturday was a very good day for solar imaging, despite the strange positions I had to get in, to be able to focus and re-focus on the low-light and low-contrast screen of my laptop. One of those positions is visible in the image below (yes, my face is not visible due to the black shirt I was using as a Sun-shield), captured close to the transit moment by my wife’s brother, Mihai. Also notice the Moon in the upper left part of the photograph.

My image with the ISS transiting the Sun was featured on the first page of SpaceWeather, where my wife’s image was also mentioned. It was truly a family weekend :).